There will not be a video post today. To be honest, I don’t have the energy to do one. My pain got progressively worse since my last post…which is something I didn’t think could happen. I grossly underestimated this surgery by assuming it would be like a mammaplasty. This was no “boob job”.

The bruising and swelling have been unreal. In addition to permanent implants, I had a fat graph during my surgery. Basically, they took tissue via liposuction from my tummy and transplanted it to my breast area to “build” it up. I should also note that, while I was in surgery, my doctor swapped out three different sizes of implants because he was not sure which size would fit. A lot of people I talk to think you can get whatever size implants you want; your chest is only so wide, and there is a maximum size depending on that width.

On the 6th or 7th day, I started to question why I even did this surgery. I could have been carrying on with my life, flat chested, and not laid up in a recliner in excruciating pain. It was around this time that I noticed my right side started to “fall” slightly. I have had implants before and slightly falling/dropping is expected; however, I never had one drop before the other. I was nervous so I called my doctor’s office and the nurse confirmed for me this was okay (she even called me a second time to just to make sure I understood). So I call my right side my “party tit”, since it is anxious and ready to go!

When I called my best friend and referred to it as my “party tit”, she burst out laughing…this made me feel better about it which is why I’m sharing it here. I’m not trying to minimize the seriousness of this operation, but I do need to laugh about something because I’m ready to come unglued and ball my eyes out at any moment.

The “party tit” is substantially more bruised than its more passive counterpart. It also has the appearance of a yellowish tint. I have a Masters in Management, not Medicine, but I’m pretty sure this means there was bleeding deeper in the tissue: unlike a regular bruise that accumulates blood at the surface and causes the “black and blue” seen in typical bruising. Both sides are equally numb at times, with sharp, stabbing pain that is characterized by a constant burning and stinging. I have a lot of pain at my incision sites (expected).

I would dare to say this surgery might be more painful than my bilateral mastectomy. It certainly seems that way right now. After talking to a few friends, I am starting to think 4 weeks of disability from work is not going to be enough. Most indicate that it was 9-10 weeks before they were able to return. I will play it by ear, but just throwing that out there because some people have asked me how long my recovery will be for their own knowledge. If you’re past the first week and you feel like you’re going to die, you’re not alone…keep pushing on… 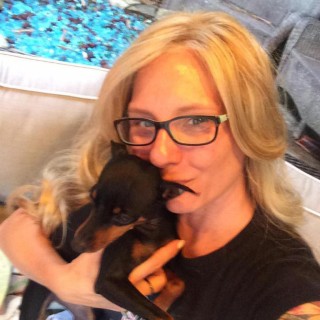